Sensei Keith Young started his journey in Kyokushin Karate in 1987 at Caringbah Kyokushin Dojo located  in the YMCA , run by Senseis Nik and Joy Cujic. He progressed through the Kyu grades and was awarded Shodan (1st Dan) in 1994.

In 2014 he was awarded Yondan (4th Dan ) after a week long observation and examination by a panel of International Karate Organisation Kyokushinkaikan members which involved a training camp and Black Belt grading at Mount Mitsumine followed by a 3 day intensive training course conducted by Kancho Matsui and Shihan Gorai in Tokyo.

Urban Self –Defence Workshops was established in 2015

“ People have different reasons for commencing training in the martial arts. Mine was very simple. I found myself in an altercation with an offender armed with a hammer. Fortunately it was resolved without any violence but I realized that I didn’t have the necessary skills to defend myself so I made a decision to change that and joined the closest Karate dojo to me. It was a life changing decision.

When one enters a dojo as a novice, one has no idea of what a particular style of martial art involves. Kyokushin Karate appealed to me immediately as it offered me everything I was looking for. The training was hard , the techniques were very effective in self defence and the sparring  was quite spirited and challenging.


It took me a little longer than usual to achieve my black belt due to work and family reasons but I never lost sight of the end goal. In fact, I believe that many karateka can benefit from a measured, slower approach to achieving Shodan and beyond. Karate is after all a life long journey.

Establishing Gymea Dojo in 1995 was a significant step in my life .In so doing  I made a commitment to devote a lot of my time to advancing Kyokushin Karate. This has been very fulfilling and I get a great deal of satisfaction in seeing people especially children develop through Karate training.

It has become a way of life for me.

Having started Karate  late in life, a permanent knee injury and work commitments prevented me from competing in full contact tournaments but it made me realize that Karate has so much more to offer the individual. I developed a keen interest in Goshin -jitsu ( Self Defence Techniques) and it has formed an integral part of my training. Much of my spare time is spent researching , reading and training in self defence techniques.

I established Urban Self Defence Workshops in 2015 to run workshops teaching simple self defence techniques and skills which are effective on the street to various groups of people who don't participate in martial arts training.

I owe a great deal of gratitude to my sensei Shihan Nik Cujic ( 6th Dan ) who is an exceptional exponent of Kyokushin Karate . He taught me that the foundation of Kyokushin Karate is developing good technique through hard , consistent , basic training as Sosai Mas Oyama himself had demonstrated.


I am extremely thankful for his assistance in my yondan( 4th Dan) grading in Japan in 2014."


​Sempai John Pyne started training in the martial arts in Taekwondo where he attained his blackbelt.  He commenced training in Kyokushin Karate  at Gymea Dojo after enrolling his son in in one of the children's classes. The type of training appealed to him and he identified with the values of Kyokushin Karate. Consequently he continued with his training under Sensei Keith Young and achieved his Shodan in 2004.

​Sempai John has a keen interest in the application of martial arts philosophy beyond physical training. He is an invaluable contributor to the Gymea Dojo as an instructor and within the Cujic Branch of the IKO Kyokushinkaikan to which the dojo is affiliated. As a distinguished medical practitioner with 5 degrees conferred on him by Australian universities, he officiates at regional and national full contact tournaments as tournament doctor,gives lectures at the annual training camp and participates  in senior gradings.

After sitting through many  karate classes at Gymea Dojo waiting for her daughter to finish training, Sempai Robin Bannell decided one day that  she was missing out on a good opportunity to do an activity with her daughter. Despite having a few health concerns she enrolled herself and commenced training under Sensei Keith Young.

​After a few years, her daughter discontinued training but the camaraderie,  benefits she was experiencing from the disciplined training and the progress she was making through the grades made her determined to achieve her blackbelt. This was a goal she set for herself. Due to time constraints she transferred to Caringbah Dojo and continued her training under Shihan Nik and Sensei Joy Cujic.

​Sempai Robyn Bannell continues to train at Caringbah Dojo but in recent years has returned to Gymea Dojo to train and assist with instructing the children's classes. This has been very satisfying for her as it gives her an opportunity to pass on some of the skills, especially in Self Defence, that she has learned over the years as well as adding another dimension to her training.

​"  There is no prouder moment as a parent and instructor to watch the progress through the various belts by new participants ,especially young children. You can see how Kyokushin Karate, with it's emphasis on Self Defence ,develops their self confidence and their ability to defend themselves in the outside world. I get a lot of satisfaction from the fact that I've played a part in their development" 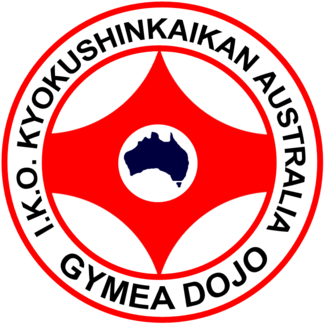