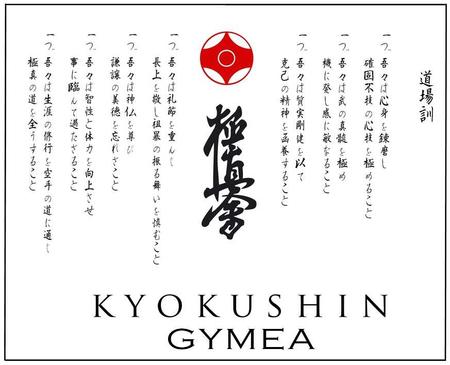 Keep your head low (modesty),
eyes high (ambition),
mouth shut (serenity);
base yourself on filial piety and benefit others.

We will train our hearts and bodies
for a firm unshaking spirit.

We will pursue the true meaning of the Martial Way,
So that in time, our senses may be alert.

With true vigor,
we will seek to cultivate a spirit of self denial.

We will observe the rules of courtesy,
respect our superiors,
and refrain from violence.

We will follow our religious principles,
and never foget the true virtue of humility.

We will look upwards to wisdom and strength,
not seeking other desires.

All our lives,
through the discipline of karate,
we will seek to fulfill the true meaning of the kyokushin way.

The Martial Way begins and ends with courtesy.
Therefore, be properly and genuinely courteous at all times.

Following the Martial Way is like scaling a cliff - continue upwards without rest.
It demands absolute and unfaltering devotion to the task at hand.

Strive to seize the initiative in all things, all the time guarding against actions
stemming from selfish animosity or thoughtlessness.

Even for the Martial Artist, the place of money cannot be ignored.
Yet one should be careful never to become attached to it.

The Martial Way is centered in posture.
Strive to maintain correct posture at all times.

In the Martial Arts, introspection begets wisdom.
Always see contemplation on your action as an opportunity to improve.

The nature and purpose of the Martial Way is universal.
All selfish desires should be roasted in the tempering fires of hard training.

The Martial Arts begins with a point and end in a circle.
Straight lines stem from this principle.

The true essence of the Martial Way can only be realized through experience.
Knowing this, learn never to fear its demands.

Always remember: In the Martial Arts the rewards of a confident and
Grateful heart are truly abundant.

​
Nikola Cujic began Karate training in 1967 in his native Belgrade – Yugoslavia at the age of 15. He joined “Student Karate Club” at D.I.F. (State Institute of Physical Culture).

In 1969 his family emigrated to Australia. On arriving  in Sydney Nik joined “Oyama Karate School” of Sensei Con Hardas in Newtown. From that point onwards he has been actively involved in Kyokushin Karate to the present day.

He started instructing Karate in 1973, first in Balmain-Sydney Dojo together with Mr. Dom Fania and later on his own at Sydney City Dojo at the "American Health Spa".  Since 1978 he has been teaching in Caringbah Dojo in the southern part of Sydney.  In 1999 he commenced teaching Karate professionally (full time) and in December 2001, together with his wife Joy, opened his present full time Dojo.

In the early 70’s Nik competed in point system competition with some success and represented Australia at the 1st Asian Pacific Tournament in Singapore in 1973.  From 1974 onwards his main interest has been Full Contact (knockdown) training and competition.

In 1977 he became the first Australian Full Contact Champion (Heavyweight) as well as Grand Champion (Yokozuna). Sosai Mas. Oyama was the guest of honour at this event and he personally promoted Nik to 2nd Dan in recognition of his achievement.  Also present were Mr Takashi Azuma (currently with Didojuku) and Mr Daigo Oishi (currently with Kyokushin Rengokai).

Nik was selected for the Australian Team in 1975, 1979 & 1984 to fight in the Kyokushin World Tournament, however he only fought in 1984. In 1975 he severely injured his hand three weeks before the tournament and was replaced by Mr Grant Radonich. Again In 1979 he was unable to attend to due to study commitments and was replaced by Mr Gary Viccars.

In 1984 after the 3rd Kyokushin World Tournament, he retired from competition and concentrated on teaching, coaching and administration of Kyokushin Karate in Australia. Some of his students became State, National and Regional Champions and have represented Australia at International and Kyokushin World Tournaments. eg. Messrs. Graham Porter, Tom Levar, Trevor Lowe, Simon Kennedy, , Steven Cujic ,Andrew Whitford and Miss Sandy Ivanovic.

When asked recently what he considers is the best part of Kyokushin Karate, he answered, “Through Kyokushin I have brothers in every part of the world.”

The characters for Kyokushin-Kai, found on the dogi (training uniform) of members worldwide. These characters were originally painted by Haramotoki Sensei, calligraphy master and friend of Sosai Mas Oyama.

The founder of Kyokushin Karate, Masutatsu Oyama, was born in 1923, began studying kempo at the age of nine and had attained the first level of proficiency (shodan) by his second year in middle school.  In 1928, while enrolled at the Yamanashi Youth Aviation Institute, he began studying at the martial-arts hall called the Shotokan, which was headed by Gichin Funakoshi.  At the age of seventeen, he had attained second dan.  In 1941, he matriculated to Takushoku University and, in 1943, began studying with So Nei Chu, a leading figure in the Goju karate world of the time.  By the age of twenty, he was fourth dan.  In 1945, he volunteered for service in the perilous special attack corps of the Japanese army and was sent south, where the fighting was taking place.  But soon World War II ended.

In 1946, he isolated himself in a temple on Mount Minobu and trained karate for a full year.  After having taken first place in the initial postwar all-Japan championship tournament, he decided to devote the rest of his life exclusively to this martial art.  In 1948, he constructed a crude hut for himself on Mount Kiyozumi, in Chiba Prefecture, and once again trained strenuously, this time for a year and eight months, during which he fed himself on grasses and berries.  After coming down from the mountain, in 1949, in order to train in breaking horns from bulls, he took up residence not far from a slaughter yard.  During his stay there, he broke the horns from fifty bulls.

In 1952, together with Kokichi Endo, an outstanding judo expert, he traveled to the United States, where he gave 270 exhibition matches and appeared on television 7 times.  Such things as his ability to break whiskey bottles with his bare hands surprised the Americans and earned him the nickname “The Divine Fist.”  He was challenged by two American professional boxers and one professional wrestler and beat them all.  Since that time, he has traveled extensively teaching and giving lectures in America, Europe, and Southeast Asia.
In 1953, Sosai Oyama opened his first "Dojo", a grass lot in Tokyo. By 1957 there were real facilities and 700 members, despite the high dropout rate due to the intensity of training. The World Headquarters were officially opened in June 1964, where the name Kyokushin, meaning "Ultimate truth", was adopted. From that point forward, Kyokushin continued to spread to more than 120 countries around the world, and registered members exceeding 10 million, making it one of the largest martial arts organisations in the world.

In 1977 Sosai Oyama visited Australia for the first time to attend the first Australian full contact tournament held at the Sydney Town Hall.

Sadly Sosai Oyama passed away on April 26 1994 at the age of 70 due to lung cancer. According to his wishes, as expressed to many of his senior students, Shokei Matsui was made Kancho (Director) of the International Karate Organisation.

The International Headquarters (So Honbu) was opened in June 1964 at Ikebukuro in Tokyo, Japan and the name Kyokushin, meaning “Ultimate Truth”, was officially adopted. Prior to this it was simply known as Oyama Karate.

In  Martial Arts circles, Kyokushin Karate is often referred to as “The Strongest Karate”. It is renowned for its rigorous training and conditioning, realistic body contact in sparring, the use of tameshiwari (breaking test) technique, heavy reliance on circular motion and discipline.

All the above, and in particular the use of circular movement in the execution of techniques, makes Kyokushin Karate rather unique compared to other Karate styles, which mainly rely on simple linear movement and non contact training.

In summary, Kyokushin Karate can be described as being elegant and serene in its movements; refined and stable in its form; classical in its methods, beliefs and protocols, yet very relevant in the 21st century as an excellent method of training mind, body and spirit and a very effective means of self defence.

The symbol of Kyokushin Karate is the Kanku. It is derived from the Kanku Kata, sky gazing form. In this Kata the hands are raised to scan the sky and the symbol is formed. (see picture on the right)

The points of the Kanku represent the fingers and imply the ultimates or peaks, the thick sections represent the wrists and imply power. The centre represents infinity, implying depth. The whole Kanku is based and enclosed by a circle, representing continuity and circular action.

Kyokushin Karate begins and ends with points and circles in which lies the strength and the life of the system. 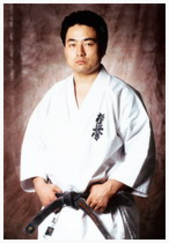 ​
Shokei (Akiyoshi) Matsui started Kyokushin Karate at age 13. In 1976, he joined the Kita Nagare-Yama Dojo in Chiba prefecture and managed to achieve the first level of Black Belt in a little over one year. In 1980, he placed fourth in the 12th All Japan Open Karate Championships, when he was just 17. Soon after, he became Chief Instructor of the International Kyokushin Headquarters school ("Honbu" Dojo) located in Tokyo.

Both in 1981 and 1982, he took 3rd Place in the All Japan Open Karate Championships and then 8th place at the same event in 1983. At the Third World Open Karate Tournament in 1984, he took a remarkable 3rd place and became famous worldwide for his amazing sprit, strength and determination. He succeeded in winning the All Japan Championships in the consecutive years of 1985 and 1986 and then successfully completed the ultimate Kyokushin challenge, the "100 Man Kumite" in record time. In Japan, he became known as a man of "unparalleled genius", someone who comng but once in an eon. In 1987, he became the youngest ever, Champion of the World. In May 1992, he opened his own school in Asakusa, Tokyo and was appointed Branch Chief by Sosai Mas Oyama.

On April 26,1994, Sosai Mas Oyama regrettably passed away, leaving the Directorship of the worldwide organization to Matsui, who then became "Kancho"(Director). In the wake of the founder's untimely death and the well documented backlash concerning Kancho's extraordinary appointment, in June of the same year, Kancho Matsui remarkably staged the 11th All Japan Weight Tournament and then in November, the 27th All Japan Championships to which over 16,000 spectators attended. The following year, he produced the hugely successful, Sixth World Open Karate Tournament, to which 168 fighters from all over the world competed and more than 25,000 spectators witnessed.

Located in Tokyo, Japan, Ichigeki Plaza officially opened its doors in October of 2005. It houses everything from an official Karate Dojo, Ichigeki Academy (Kickboxing and MMA training), and even an organic cafe. This all-around health and fitness facility continues to promote and expand on the original philosophy of Sosai Mas Oyama to bring the spirit of Kyokushin to every corner of the world and make it avaiable to all.

Currently, the International Karate Organisation has over 12 million members in 125 countries. While simultaneously managing the organisation from its headquarters in Japan, Kancho Matsui travels to scores of branches each year visiting countries and cultures around the globe to teach and spread the spirit of the Kyokushin Way. 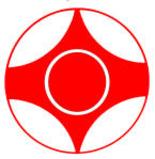 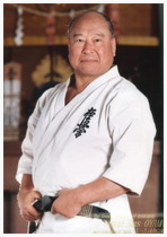